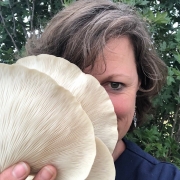 Although among the most widely distributed organisms on the planet, most fungi are inconspicuous because of their microscopic size and subterranean lifestyles. Often we are unaware of their existence beneath our feet until their fruiting bodies, mushrooms, emerge.

The fungus kingdom encompasses an enormous diversity of taxa with varied ecologies. A characteristic that places fungi in a different kingdom from animals, plants and bacteria is the presence of chitin in their cell walls.

Fungi are genetically more closely related to animals than to plants. Fungi do not photosyntesize, they are heterotrophs (organisims that cannot produce their own food), acquiring their food by absorbing dissolved molecules, typically by secreting digestive enzymes into their environment.

Scientific estimates now place fungi as the most abundant organisims on earth, far outnumbering their plant and animal counterparts, but only about 70,000 species of fungi have been described by mycologists.

Fungi perform an essential role in the decomposition of organic matter and have fundamental roles in nutrient cycling and exchange in the environment, many forming symbiotic relationships with plants.

They are also essential to many household and industrial processes. Fungi have long been used as a direct source of human food, in the form of mushrooms and truffles; as a leavening agent for bread; in the production of cheese such as Brie and Camembert; and in the fermentation of various food products, such as wine, beer, and soy sauce.

The discovery of penicillin, an antibiotic derived from fungi, revolutionised modern medicine. Fungi are now use to produce many antibiotics, cyclosporine, and other medicines. However, many species of fungi can be parasitic or toxic.

Want to learn more about these fascinating lifeforms and how you can grown your own mushrooms at home?

Watershed Landcare have invited proprietor of Gourmet Mushrooms of Mudgee and fungi fanatic, Uschi Rowlands, to present a talk about fungi as part of our lecture series at the Mudgee Small Farm Field Days.

Uschi’s talk, Fascinating Fungi, will be held at the Straw Bale Building (L8) at 10am on Saturday 13 July and will provide an overview of the Fungi Kingdom, some of their fascinating traits, and a look at how mushrooms are grown.

This event is supported by Watershed Landcare and is a part of the NSW Government’s Local Landcare Coordinators Initiative, supported through the partnership of Local Land Services and Landcare NSW.

Landcare lectures at the Field Days
Scroll to top