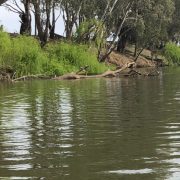 As well as something you throw on the barbie, snags are trees and branches which fall into and lodge into streams and rivers and form an essential part of river ecology.

Like coral reefs in the marine environment, snags are the place where the largest number and diversity of life is found in rivers and streams.

In the past de-snagging was practised across Australian rivers; to improve navigation, reduce erosion and for flood control.

It is now apparent that this practice not only damaged vital habitat for large native freshwater fish and other biota but, in some cases, also increased streambank erosion and downstream flooding.

The removal of snags is no longer common practice but there are few remaining snags and the source of new snags, healthy, mature riparian vegetation, is also scarce along the banks of many our watercourses.

Snags, or large woody debris, are a vital component in providing a variety of habitat structure in riparian environments.

Some snags may be submerged in the sediment in deep pools while others may protrude into the air and provide a ladder between the water and streambank. Some rest in open, sunlit conditions, while others may be shaded or in darkness.

Fallen trees and branches alter the flow regime around them; providing still pools or fast flowing eddies. They are integral in providing a refuge for aquatic organisms from faster currents in times of high flow and as nursery habitat.

By trapping leaves, twigs, sediment and other organic matter they not only provide a rich reservoir of food but also create an abundance of nooks and crannies for small animals. Fungi and bacteria living on the surfaces of snags contribute to its breakdown and in turn become food for other microscopic life forms, macro-invertebrates and fish.

So next time you see a bit of timber in your local watercourse think about the bounty of life that subsists in this rich and varied habitat.