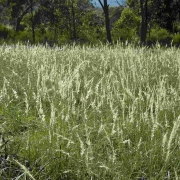 The latest Climate Driver Update released by the Bureau of Meteorology suggests an increased chance of above average rainfall across much of Australia during spring. Climate models are indicating a 50% chance of La  Niña forming in 2020 and the possibility of a negative Indian Ocean Dipole (IOD) developing by early spring.

The forecast for spring is looking good, so how do we make the most out of all that water?

One of the best places to store water in our garden or on our farms is in the soil, where it will be available for plant growth long after the rain has stopped. But how do we make sure it gets in there?

Barren soil impedes the infiltration of water into the sub-soil layers. Soil which has been left bare forms an impervious layer on the surface so water runs off rather than soaking in.

Ground cover, a layer of mulch or living plants, increases infiltration of water into the soil. In turn this reduces erosion by decreasing the amount of run off and slowing the flow of water over the surface.

In grazing systems, native grasses provide one of the cheapest and most effective ground covers.

In most instances, native grasses do not need to be sown as they either already exist in a pasture or the seed bank is there. They are perennial so not only provide feed for livestock year round but also have deep root systems which are capable of reaching deeper water.

Additionally, native grasses do not require fertilisation, in fact some are hindered by excessive nutrients, so native pastures are cheap to maintain, requiring little inputs other than some consideration from the land manager. As we move into spring and the temperatures warm up maintaining good ground cover becomes even more important.

Evaporation is also reduced by creating a humid environment on the soil surface. Whether that is a layer of living plants or mulch, that humid barrier reduces the flux of water from the wet soil environment into the dry atmosphere.

As much as we all like to see our dams full, before the next time it rains consider the following: Do you want all the rain that falls on your place (and the top soil it takes with it) to end up in a dam where its unavailable for plant growth and exposed to evaporation? Or, deep in the soil…

Boost to Landcare in the region
Scroll to top