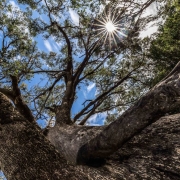 Box Gum Grassy Woodland is the shortened name given to the endangered ecological community ‘White Box, Yellow Box, Blakely’s Red Gum Grassy Woodland’. This community is characterised by a sparse shrub layer, a diverse mix of native grasses and herbs, and is dominated by the eucalypts White Box, Yellow Box and/or Blakely’s Red Gum. Grey Box may also dominate or co-dominate in the Nandewar Bioregion.

Soil fertility is the most important environmental factor governing the localised distribution of Box Gum Grassy Woodlands. They are closely associated with fertile clay loam soils of moderate depth on flat to undulating terrain, along the lower slopes of the Tablelands and Western Slopes in New South Wales. Within the Watershed Landcare region they occur mainly in areas with a 550 mm to 800 mm annual rainfall and an elevation below about 700 m above sea level.

Today less than 4% of Box Gum Grassy Woodland remains, much of which is highly fragmented and in poor ecological condition. The productive and fertile clay loam soils are the reason, because when Europeans settled an area for agricultural purposes they would have first chosen the most productive parts of the landscape.

Many large hollow bearing trees of the Box Gum Grassy Woodlands are isolated and under stress, or reaching the end of their life span. Natural recruitment is rare due to much of the Box Gum Grassy Woodlands being converted to crops and pastures. Large hollow bearing trees provide habitat for a myriad of insects, birds, reptiles and mammals, shade for livestock, and give the landscape its quintessential Australianness. These trees cannot be replaced in the short to medium term and need to be protected from the added nutrients of livestock camps and the cultivation of soil close to their root system.

Watershed Landcare have launched our ‘A Home Among the Gum Trees’ project and we are seeking expressions of interest (EOI) from landholders in our region. Funding of $7,000 is available to conduct on-ground works to protect mature hollow bearing paddock trees in Box Gum Grassy Woodland. EOIs close 15 February.

For more information or to submit an EOI, visit our website.

The Watershed Landcare ‘Home Among the Gum Trees’ Project is supported by Local Land Services through funding from the Australian Government and is a component of the Driving Corridor Connectivity Project funded through NLP2.

Imagine it took more than a 100 years to build your home?
Scroll to top