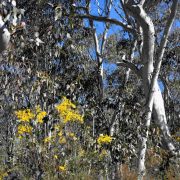 Although in common use today, the origin of the term is relatively recent. Wildlife scientist and conservationist Raymond F. Dasmann, first used ‘biological diversity’ in his 1968 book but it was only in the 1980s that it came into common use in science and environmental policy. The term’s contracted form ‘biodiversity’ first appeared in publication in the late 80’s and since then has achieved widespread usage.

‘Biodiversity’ is often used interchangeably with the well defined terms, species diversity and species richness, but it’s also more than that; referring to the variety and variability of life at all levels of biological organisation – from genes to entire ecosystems – encompassing every living thing that exists on our planet.

Biodiversity month is held in September each year and aims to promote the importance of protecting, conserving and improving biodiversity, both local and global.

As humans, we depend on biodiversity for our food, clothing, health, well-being and enjoyment of life and there’s a lot we can all do to help protect and improve biodiversity.

Whether it’s in our towns and cities, bushland or waterways and oceans, reducing our environmental footprint and being conscious of the impact that our every-day actions and consumer choices have, can have an enormous impact on this intricate and interdependent ‘web of life’. 84% of our plant species are unique to Australia.

Australia is home to between 600,000 and 700,000 species, many unique to this continent. More than three quarters of our plants and mammals, and 45 per cent of our birds species are endemic. And if you include the rich variety of marine life, from the cold southern oceans to the tropics, we are the most biodiverse developed country in the world.

So get out there and enjoy it! The Australian landscape, it’s species and ecosystems are pretty special. Take the time this month to appreciate the unique beauty and character of our local environment.