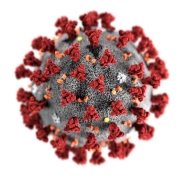 Viruses are by far the most abundant biological entities on Earth and they outnumber all the others put together. But are they a form of life or an organic structure?

Viruses contain genetic material, reproduce and evolve. However, they do not posses a true cellular structure, which is often regarded as the basic unit of life, or have their own metabolism. For this reason they are referred to as “organisms at the edge of life” and opinion is still divided on whether they are a life form, or organic structures that interact with living organisms.

Viruses are tiny, about 100 times smaller than bacterial cells. Although their pathogenic qualities were known they eluded discovery as the causative agent until relatively recently in our scientific history. Most viruses cannot be seen with an optical microscope and their structure was not described until the invention of electron microscopy in 1931.

Outside a host organism viruses exist as particles called virions. They consist of genetic material, DNA or RNA, surrounded by a protective protein coat. Some viruses also have a lipid envelope.

A virus relies on a host to replicate, they require the metabolism of the host cell to assemble copies of themselves. They infect all types of cellular life including animals, plants, bacteria and fungi. Some can only infect a limited range of hosts and can be species specific while others have a broad range. For example, smallpox can only infect humans while the rabies virus can infect a variety of mammals.

Transmission of viruses can be vertical, from mother to offspring, or horizontal, from host to host. Horizontal transmission can occur via a number of pathways; transmission of body fluids such as blood or saliva, spread by coughing and sneezing, entering the body in food or water by the faecal–oral route and a range of vectors such as mosquitoes, or aphids that transfer sap from plant to plant.

Most viruses elicit an immune response in host organisms, eliminating the virus and providing immunity to future infections. Some viruses elude this immune response by constantly changing the structure of their surface proteins. Viruses are difficult to treat because they use the hosts’ metabolic pathways to reproduce, drugs that interfere with viral replication can also cause toxic effects to the host. Vaccination has proven to be the most effective medical intervention, providing immunity to infection.

However, most viruses are fragile when outside a host organism. The simple act of washing your hands with soap is one of the most effective ways of preventing infection and spread. By surrounding the viruses on your skin with soap, a surfactant, the lipid envelopes enclosing the virus are ruptured, spilling essential proteins and rendering the virus useless.

Do you have a creek or river on your land?
Scroll to top