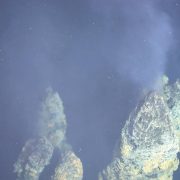 Discoveries of life deep within the earth’s crust are challenging concepts of what was thought to be a ‘suitable’ environment to sustain life.

Microbial communities have been detected in rock as far as 3 km into seabed and continental crust. Their existence in habitats devoid of sunlight, water and nutrient poor, anoxic and hot is forcing scientists to reevaluate the limits of life.

Sites in the world’s deepest mines, boreholes, oceanic hydrothermal vents and cracks in the ocean floor have become accessible to scientists through ultra-deep sampling; scientific drilling projects and deep ocean submersible research vehicles. These technologies allow researchers to obtain samples for further analysis in the lab and to install in-situ monitoring equipment.

Early results from one site, Hole C0020A in the Japan Sea, indicate a slow-growing microbial community able to metabolize a range of carbon and nitrogen compounds more than 2 km below the seafloor.

Other studies have revealed multiple, unique bacterial and archaeal species not encountered before, some existing at temperatures in excess of 100ºC. But this subterranean life is not just limited to microbes; various fungal species and more complex organisims have also been found, including 4 invertebrate species (flatworms, rotifers, segmented worms, and arthropods) at a depth of 1.4 km below the Earth’s surface.

Debate rages in this new field of research about the scale of the underground biomass, what has been dubbed the ‘deep biosphere’. There are suggestions that life can exist up to 10 km into the crust and estimates of the subsurface biomass range from 15-50% of the world’s total biomass.

Research is now focusing on understanding how such life survives. Sparsely distributed and slow-growing, these lifeforms seem to invest all their energy into maintain their existence rather than growth. Initial results suggest that these microbes are able to metabolise a suite of chemicals released by the interaction of water and rock such as sulfate, nitrate, methane, ammonia, and iron, as well as carbon.

Although in it’s infancy, this fledgling, but rapidly expanding, field of science is turning previously held assumptions on their head. Ongoing research may give us a better understanding of the deep biomass but for now questions – about the origins of life on earth, and the possibility that life here may have originated underground; the definition of what is hospitable for life, not only on earth but on other planets; and also how the presence of these microbes and their activity is affecting processes on the surface – remain unanswered.

Helping your garden deal with the heat wave
Scroll to top