The Tarengo Leek Orchid (Prasophyllum petilum) is a slender herb growing up to 30 cm, its cylindrical leaf reaching 25 cm. A narrow flowering spike is produced from October to November, with 5 to 18 flowers distributed sparsely along it. Flowers are greenish to pinkish mauve, 5-7 mm across, and subtly, sweetly scented. This little flowering plant might not sound like much, but what if I told you that it is only found in a few places across the state, and Ilford cemetery is one of them.

The Prasophyllum genus includes about 80 species, mainly native to southern Australia. Approximately one-third of the known species are rare or threatened, and the Tarengo Leek Orchid is one such species, classified as endangered under the Threatened Species Conservation Act 1995.

When first described in 1991, the Tarengo Leek Orchid was known only from its locality at the Hall Cemetery in the ACT. It has since been discovered at four sites in New South Wales: Captains Flat Cemetery, Ilford Cemetery, Steves TSR at Delegate and the Tarengo TSR near Boorowa. 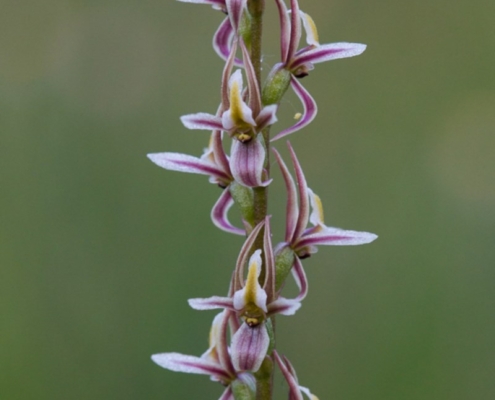 Watershed Landcare met with Local Land Services, Council Representatives, and the Department of Primary Industries at Ilford Cemetery last month to devise a strategy to protect the future of this dwindling species. The plan will include recommendations on mowing and slashing regimes, weed control and potential future ecological burns in the small conservation area at Ilford.

The conservation area at Ilford has now been added to the Saving our Species list, one of the most significant government-led conservation commitments ever undertaken in NSW. Including Tarengo Leek Orchid and the Ilford site under the project will streamline activities long-term to protect the area and improve the coordination of management activities into the future.

The fragility and sparsity of this quaint little plant illustrates just how fragile individual elements in the ecosystem are. From microscopic algae to towering trees, every plant and animal has a role to play in creating a healthy natural environment and needs our protection. Cemeteries in regional areas often act as a refuge for native grasses and forbs, having never or rarely been grazed by stock and when the management conditions are right. We must work together to protect these areas as they are home to some of the last known specimens of some endangered plant species in the area, just like the Tarengo Leek Orchid.