The Emerging Carbon Market – What’s in it for Farmers?

In January 2021, you may have seen a story about an Australian cattle farming family, Wilmot Cattle Co, who struck a deal with tech giant Microsoft to sell about half a million dollars worth of carbon credits! The credits come in the form of more than 40,000 tonnes of sequestered carbon dioxide in the soil, which the family can deliver with their sophisticated and regenerative grazing methods to contribute to the carbon offset targets of Microsoft.

Over the past decade, The Wilmot Cattle farm has been improved with time-controlled adaptive planned grazing, increased stocking numbers, density and making paddocks greater in number and smaller in size. These management strategies have resulted in complete ground cover, growing biomass, and better water-holding capacity on more than 4,000 hectares.

The Aussie family is getting paid to capture and store carbon on top of their thriving cattle operation profits. Carbon farming is an emerging market, and this is a story that speaks to the opportunities that are rising for farmers and land managers around the globe.

Carbon farming is, in essence, farming to reduce greenhouse gas emissions and sequesters carbon in vegetation and soils. It involves careful land, plant, water, and animal management to increase farm production whilst simultaneously capturing carbon dioxide from the air. There are many ways to improve farming methods that lead to increased carbon capture. Some popular techniques are storing carbon in soils, planting native trees and shrubs, managing stock to allow native woodland and forest to regrow, and beef herd Improvement to reduce methane. 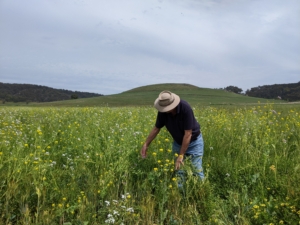 Soil is one of the largest carbon sinks that we can control. As the carbon levels in our soils increase, there are significant co-benefits to the land and now, farmers’ ability to create more income.

The benefits of Carbon Farming (along with Carbon Sequestration) include less erosion and soil loss; better soil structure and fertility; less soil salinity, healthier soils, vegetation, and animals; more biodiversity; buffering against drought; and greater water efficiency. Plus, the ability to earn carbon credits, which is how farmers can make money from drawing down more carbon.

While this is a developing industry worldwide, Australia is leading the way with a government-supported ‘Emissions Reduction Fund’, which provides a framework for carbon credit trading. These carbon credits are called Australian Carbon Credit Units (ACCUs), representing one tonne of stored carbon dioxide equivalent (tCO2-e) or avoided emissions. Many independent advisors such as Carbon Farmers of Australia and GreenCollar have emerged to assist farmers with planning and developing carbon projects under the Emissions Reduction Fund (ERF).